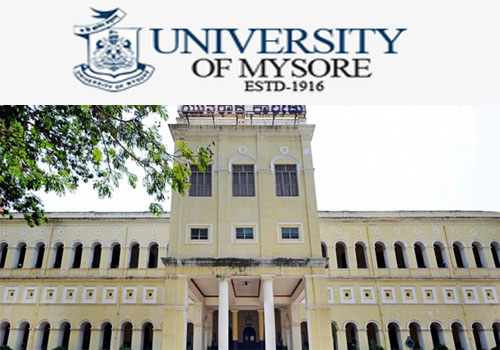 The University of Mysore is a public state university located in Mysore, Karnataka, India. The university was founded during the reign of Krishnaraja Wodeyar IV, the Maharaja of Mysore.

More About the University

More information about the University

The University of Mysore was established July 27, 1916 during the benevolent government of the Maharaja of Mysore, His Highness Nalvadi Krishnaraja Wodeyar (1884-1940). The genesis of Mysore University stems from an in-depth reading and analysis of five years of higher education around the world. The mission of Mysore University, described in the 1916 regulations published in the Extraordinary Mysore Gazette, aims to “promote education and research in the traditional and traditional fields of arts, humanities, pure and applied sciences and Professional disciplines “. Sir M Visvesvaraya (1860-1962) played a decisive role in the implementation of the University. Since the University has gone through several stages of development. It started with only two faculties, namely Arts and Sciences offering BA courses, BSc, BCOM and BT, the University has added the Faculty of Engineering in 1917 and MA programs at the Maharaja University of Mysore. In 1918, a master’s degree program at the Central University, Bangalore in 1919 and the Mysore School of Medicine in 1924, thus laying a solid foundation for multiple college faculty. In 1941, new courses were added that lead to honors.